The generation now coming of age has been taught three Great Untruths: their feelings are always right; they should avoid pain and discomfort; and they should look for faults in others and not themselves. These three Great Untruths are part of a larger philosophy that sees young people as fragile creatures who must be protected and supervised by adults. But despite the good intentions of the adults who impart them, the Great Untruths are harming kids by teaching them the opposite of ancient wisdom and the opposite of modern psychological findings on grit, growth, and antifragility. The result is rising rates of depression and anxiety, along with endless stories of college campuses torn apart by moralistic divisions and mutual recriminations.

This is a book about how we got here. First Amendment expert Greg Lukianoff and social psychologist Jonathan Haidt take us on a tour of the social trends stretching back to the 1980s that have produced the confusion and conflict on campus today, including the loss of unsupervised play time and the birth of social media, all during a time of rising political polarization.

This is a book about how to fix the mess. The culture of “safety” and its intolerance of opposing viewpoints has left many young people anxious and unprepared for adult life, with devastating consequences for them, for their parents, for the companies that will soon hire them, and for a democracy that is already pushed to the brink of violence over its growing political divisions. Lukianoff and Haidt offer a comprehensive set of reforms that will strengthen young people and institutions, allowing us all to reap the benefits of diversity, including viewpoint diversity.

This is a book for anyone who is confused by what’s happening on college campuses today, or has children, or is concerned about the growing inability of Americans to live and work and cooperate across party lines. 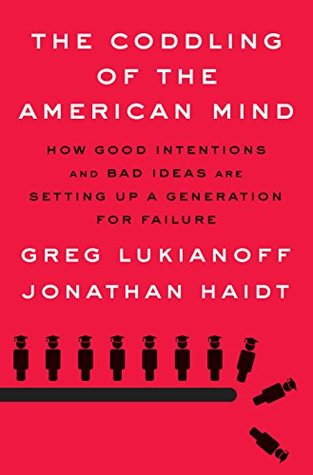 This is an important book. I’m tempted to summarize the whole thing for you right here, but that would likely get too long too fast, and I want you to go read the book after all. Along with Amy Chua’s Political Tribes, Coddling are two of the most important books of the year.

Jonathan Haidt is a fairly new author to me. I hadn’t heard of him until a couple of months ago. He is a moral psychologist at the New York University Stern School of business. I listen to a TED talk now and again, and I stumbled upon this one by Jonathan Haidt entitled “The Moral Roots of Liberals and Conservatives“, and I found it very compelling; he makes an argument, based on his book The Righteous Mind, that the central differences between liberals and conservatives stem from different constructs of morality, what he terms “the moral matrix.” On five essential scales (care/harm, fairness/unfairness, loyalty/betrayal, authority/subversion, and purity/degradation) liberals selectively weight care and fairness, and have little room for aspects of loyalty, authority, or purity. Conservatives weight all five a little more evenly than do liberals. In order to understand someone on the opposite side politically, you need to try entering their “moral matrix” to see why they value the things they value. At one point in the talk, Haidt says something along the lines of, “After studying this, I finally got conservatives!” Perhaps it sounds slightly condescending, like your in a laboratory being examined by a doctor/scientist in a lab coat, but this is virtually the first time I had heard someone left of center really engage with conservative thought rather than ridicule or reject it outright. Politics is a nasty game, and we rarely spend time thinking about why the other side arrives at different opinions. Haidt offered what to me seemed like a meaningful way to engage in dialogue about political issues without resorting to oversimplified arguments and ad hominem attacks.

After listening to this first talk by Haidt, I found a couple more by him (including this interesting one given at the Museum of Sex titled “It’s Hard to Gross Out a Libertarian: Jonathan Haidt on Sex, Politics and Disgust.“). Eventually, YouTube began referring videos to me by a host of other individuals with similarly fascinating arguments: Jordan Peterson, David Rubin, and Sam Harris. I had heard of Jordan Peterson before, as I had his book Maps of Meaning on my reading list, but I was hesitant to read it, because I felt like he was going to “explain away religion.” Similarly, I balked when I looked up Sam Harris, because he’s considered what is called a New Atheist, and is very open about the fact that he sees little use for religion in a modern world. His books Letters to a Christian Nation and The End of Faith, just the titles speak for themselves. But despite some fundamental differences in our backgrounds in terms of both religion and politics (all four consider themselves to hold liberal views, and voted for Obama– well, except Peterson; he’s Canadian), I was able to appreciate their arguments that allows for an essential space for dialogue in an increasingly polarized society. It creates a space where ideas have to be defended on their merits rather than appeals to emotion or pathos. It is refreshing to hear ideas instead of insults.

Coddling also has a co-author, Greg Lukianoff, of whom I hadn’t heard before. After looking at his author bio, I found out he was the founder of the Foundation for Individual Rights in Education (FIRE). I had stumbled upon FIRE previously, after reading a rather obscure academic book on free speech You Can’t Say That!: The Growing Threat to Civil Liberties from Antidiscrimination Laws by David E. Bernstein. The book was sometimes uncomfortable to read, because you have to stomach a lot of things you disagree with, regardless of your political persuasion, when you advocate for free speech. But Bernstein’s central thesis is that to maintain a free society, you have to be willing to put up with a few noisy jerks. And increasingly, some in society are unwilling to do so, and they are getting their way on university campuses in particular.

Enter The Coddling of the American Mind: How Good Intentions and Bad Ideas Are Setting Up a Generation for Failure. The idea for this book came from a few shared experiences of the authors. Haidt shares his own personal conflict with the forced quieting of free speech in the classroom when he showed a short video to his students. In the video, students were being interviewed on their ideas on gay marriage. One student expresses that while the idea of gay sex makes him uncomfortable, he himself was able to see the value of letting individuals choose for themselves, and he would support gay marriage. Take his statement for what you will. One student found the video absolutely offensive, and interrupted the classroom, demanding an apology from Haidt. Haidt didn’t apologize immediately, and explained the context of the video, and that the individual was actually pro-gay rights. As the class wasn’t going to continue until this student was appeased, Haidt gave an apology. Not satisfied, the student filed a complaint against Haidt accusing him of homophobia and hate speech. Haidt was able to defend himself, but he got wrapped up in months of investigation to clear the matter up.

Lukianoff noticed similar issues on campus. He took issues that many of the ideas being promoted on campus directly conflict principles of cognitive behavioral therapy (CBT). CBT a method based on the idea that you can’t achieve mental health until you learn to question your feelings and free yourself from common distortions of reality. The three ideas prevalent on campus are the central ideas that are challenged in this book:

Haidt examines each of these ideas in turn, and counters them with both scientific evidence and ancient wisdom. He also examines several cases of the effects these ideas have had on campus: faculty members being forced to resign after a single misplaced word, students willing to resort to violence shutting down speakers they disagree with, and student mobs patrolling campuses. It sounds frightening. Haidt tries to answer the question of why these ideas have become ascendant, and he traces six narrative threads that he argues contribute to the problem:

I would reiterate that Haidt considers himself a centrist and agrees with many policies left of center. This is not a conservative propaganda machine, although many have tried to paint it as such. Haidt’s book is as much a diagnosis as a prescription. He makes several recommendations at the end for individuals, parents, and universities. Universities need to be committed to free speech. We parents need to perhaps rethink some of the ways we are parenting our kids. Haidt also has created a website Heterodox Academy where readers can find additional resources and stay up to date on free speech issues on campus.

2 thoughts on “Book review: “The Coddling of the American Mind: How Good Intentions and Bad Ideas are Setting Up a Generation for Failure””