I added American Universities and the Birth of Modern Mormonism after listening to an interview with the author, Thomas Simpson, at the Maxwell Institute Podcast. It got me excited, because I had recently read another book with “Modern Mormonism” in the name, David O. McKay and the Rise of Modern Mormonism by Greg Prince. Simpson’s book looks at a slightly earlier era than Prince’s, but they do overlap. Simpson’s book covers the years 1867 to 1940 as Mormonism was transitioning from an isolated communitarian theocracy to a denomination fully integrated into American society, politics, and culture. How did this happen? Simpson poses the question in the introduction: 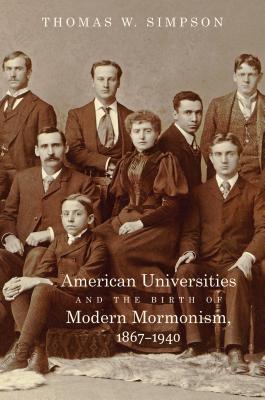 Fundamental questions linger, however, about the history and the process: how did the LDS Church grow from a small, persecuted sect into one of the world’s fastest-growing religions? More specifically, how did the nineteenth century’s “most despised large group” become so loyal to the United States in the twentieth? In other words, how could nineteenth-century Mormons, after decades of principled, costly resistance to federal authority, suddenly jettison their utopian separatism— their polygamy and their communitarian ethics, economy, schools, and politics— and embrace the institutions and values of their tormentors?

I have looked at multiple sides to this question in other books. I read about the challenge to Apostle Reed Smoot’s sitting in the U.S. Senate, and the compromises Church leaders had to make including shedding all aspects of the legacy of polygamy. Indeed, some may stop there and attribute most of the cause there. Simpson, however, looks for the answer at the rising wave of students from Utah attending eastern universities: “Indeed, this book’s central thesis is that modern Mormonism was born in the American university, and the Mormon path to citizenship—to a genuine, passionate sense of belonging in America— ran directly through it.”

The books examines through the personal experiences of these students, and how they reconciled their beliefs with the teachings of the academy. This book is fascinating, because it brings up the tension between the ecclesiastical and academic elites in Mormonism that exists to this day. It brings up questions of academic integrity and freedom in the setting of BYU: what does academic freedom look like in an institution beholden to a church? Of course, plenty of church-sponsored schools existed before BYU came along, but BYU has its own unique flavor. The book tells an interesting story about a conflict between Church president Joseph F. Smith and the son of the apostle James Talmage, Sterling, who was a geologist. Joseph F. Smith asserted in a school setting that when the Bible says the sun and moon stopped in the sky during a battle initiated by Joshua, the sun literally stopped. Sterling couldn’t let that one slide, and he commented:

In your boyhood, and in mine, the statements of the General Authorities of the Church were considered to be final; nobody in good standing in the Church presumed to question them. Today this is not so, and I believe for only one reason, namely, that some of the authorities have made statements that are not worthy of belief, and I cite your explanation of the miracle at Joshua’s battle as a conspicuous but by no means an isolated example of what I mean.

This recalled similar examples of conflicts I have read about, namely, the account of the chemist Henry Eyring who conflicted with church president Joseph Fielding Smith over evolution in Mormon Scientist, and the biography of church historian Leonard Arrington, who disagreed with the Twelve over how to present Church history to the world. It seems to me that such conflicts are inevitable but good and needed to keep sane and on the right track. It reminded me of the discussion surrounding confirmation bias in Jonathan Haidt’s book The Coddling of the American Mind:

Each scholar suffers from the confirmation bias—the tendency to search vigorously for evidence that confirms what one already believes. One of the most brilliant features of universities is that, when they are working properly, they are communities of scholars who cancel out one another’s confirmation biases. Even if professors often cannot see the flaws in their own arguments, other professors and students do them the favor of finding such flaws. The community of scholars then judges which ideas survive the debate. We can call this process institutionalized disconfirmation. The institution (the academy as a whole, or a discipline, such as political science) guarantees that every statement offered as a research finding—and certainly every peer-reviewed article—has survived a process of challenge and vetting. That is no guarantee that it is true, but it is a reason to think that the statement is likely to be more reliable than alternative statements made by partisan think tanks, corporate marketers, or your opinionated uncle. It is only because of institutionalized disconfirmation that universities and groups of scholars can claim some authority to be arbiters of factual questions.

I firmly think we need this in the Church as well. While we have a firm claim to divine revelation, we also know that prophets are imperfect and subject to mistakes, which are more than apparent in our history. By listening to all sources, we can be more sure that we are taking the right steps as we move forward in the restored gospel. I am glad that there is increasing openness to this in the Church today. The release of Saints: The Standard of Truth presents Church history in an open and upfront way. And I love this statement from Elder Ballard where he acknowledges the expertise that scholars provide:

I am a general authority, but that doesn’t make me an authority in general… I worry that members expect too much from their leaders and teachers, expecting them to be experts [in areas and topics] well beyond their expertise. If you have a question that requires an expert, please take the time to find an expert to help you.

This book feels very timely, even though the book reveals that this struggle between faith and intellectual rigor has existed for the entirety of the Church’s existence. I concluded from the book that yes, you can be a faithful member of the Church and a devoted scholar and seeker of truth. But your faith and you as a person will change in ways that you cannot anticipate. Learning is in one sense a form of death because you have to let aspects of your ignorance die (I’m pretty sure I’m paraphrasing Jonathan Haidt there, but I can’t find the reference). I think it is in Ecclesiastes where it states that with much learning comes much sorrow. But it also leaves me with great hope that LDS scholars have much to contribute to the faith, and that Church leaders recognize that.