Goodreads Summary
Here the great Catholic historian Hilaire Belloc analyzes 5 of the greatest heresies of all time: Arianism, Mohammedanism (Islam), Albigensianism, Protestantism, and “the Modern Attack,” showing that the world would be vastly different today if Arianism or Albigensianism had survived–and how it is different because Protestantism survived. He predicts the re-emergence of Islam; explains how the Modern Attack is the worst threat to the Catholic Church ever. 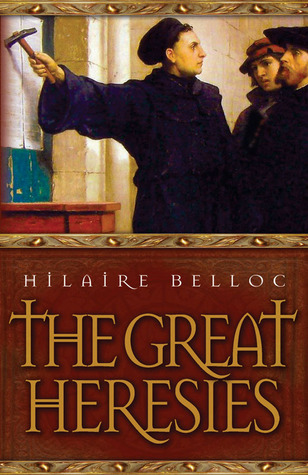 Hilaire Belloc isn’t a well-known name these days, but he was an influential writer back in the early 20th century. I only encountered him because of his friendship with G. K. Chesterton mentioned in Wisdom and Innocence, a biography of GKC I read last year. Belloc, like Chesterton, was a Catholic, but I feel that Belloc was a bit more, hm, confrontational than Chesterton? Don’t get me wrong, Chesterton spoke his mind, but Belloc didn’t has the sense of humor that made Chesterton seem more good-natured.

I picked The Great Heresies as the first book to read by Belloc because it was mentioned several times in Chesterton’s biography. He was a very prolific writer, and I don’t plan on obsessively reading him like I did Chesterton, but it was still a good read. Heresies is a sweeping history of the two- century history interpreted through a Catholic lens centering on the what Belloc considers the five greatest heresies. They are as follows:

The Arian heresy of the 3rd and 4th centuries that taught that Christ was not co-eternal with the Father, but was begotten of the Father. Belloc’s interpretation is that Arianism “was willing to grant Our Lord every kind of honor and majesty short of the full nature of the Godhead. He was granted one might say paradoxically all the divine attributes– except divinity.” He explains it arose out of a desire to explain everything, not content with the unresolved mystery of the Trinity.

Islam according to Belloc was not a separate religion, but a Christian heresy that was started from outside the bounds of the Church. Mohammed repackaged the key components of Catholicism (the omnipotence of God, the immortality of the soul, punishment and reward after death), but denied the Incarnation of Christ. It was Christianity lite.

Albigenianism was Manicheeism resurfaced, the dividing of the world into good and evil with an evil power that was just as eternal as the good: a dualism that creates a hatred of all things physical. This is just a misunderstanding of the Problem of Evil, according to Belloc, that set itself up in opposition to the Church. I wasn’t even aware of the Albigenians until I read this book.

Protestantism is unlike the three previous heresies, in that it didn’t resolve around one key doctrine misunderstood, and the fight is still ongoing. Granted, he believes Protestantism is really dead in the face of modernity, and all the former heretics have become atheists. I really liked the historical understanding Belloc adds here. He breaks the Reformation into two different periods: the first initiated by Martin Luther in which no talk of a separate Church was considered: the Reformation was about reforming the existing Church, not creating a new one in opposition. A century later, when the two groups couldn’t resolve their differences, only then did they set up two competing world views in opposition to each other. Calvin gets a lot of blame from Belloc for initiating the first church set in opposition to the Church. He also blames Protestantism in general for the rise skepticism present today: we moved on to “more important questions” than religious truth, and religion became a sideshow.

Modernity is the greatest threat to Catholicism, according to Belloc, and is defined by materialism, and an accompanying skepticism. It feels a little dated now that “modernity” has come a long ways since Belloc’s day, but a lot of his points remain the same. I don’t know if a lot of people would agree with him that moderns reject reason: they usually consider themselves the reasonable ones. There are plenty of political arguments though that don’t resolve around reason, and I think Belloc’s assertion here still holds:

The ancient process of conviction by argument and proof is replaced by reiterated affirmation; and almost all the terms which were the glory of reason carry with them now an atmosphere of contempt.

In his introduction, Belloc explains that heresy is “the dislocation of some complete and self-supporting scheme by the introduction of a novel denial of some essential part therein.” Heresies aren’t self-sustaining, and in this sense sound like a parasite. I did have to laugh though that his first explanatory example of heresy hasn’t aged well:

The old scheme of physics, often called in England “Newtonian”, is a scheme of this kind. The various things asserted therein about the behavior of matter, notably the law of gravity, are not isolated statements any one of which could be withdrawn at will without rearranging the rest; they are all the parts of one conception, or unity, such that if but modify a part the whole scheme is put out of gear.

The sweeping history of it all in a single interpretive frame is powerful, and I admire it very much. I again feel cheated in my education for not having an appreciation of what was accomplished during the Middle Ages. All of this is new to me. I remember when AP European history, even back when I was in high school, was considered controversial because it was too “Eurocentric.” I had plenty of US History, and you’d still think we were the center of the world after that.

I’m glad to have found Belloc, and I continue to feel drawn to these great Catholic authors. They feel grounded in a solid view of the world that isn’t rooted in the skepticism inherent if science if your only interpretive tool. As a Latter-Day Saint, I feel a kinship with them. We may agree to disagree on many fundamental points (I have also been simultaneously listening to Sam Harris’s podcast Waking Up, with similar sentiments), but more Bellocs in the world would make it a better place.