Do ethics have a place of discussion in our universities and workplaces? I brought this question up during a panel session on careers in science at the annual NanoDDS conference this year. We had panelists across a variety of disciplines, including a venture capitalist, a professor, and a patent lawyer. I posed the question, first addressed to rep from the venture capitalist firm, who had referred to her job as “the dark side of science”:

“Your phrasing, ‘the dark side of science’ reminded me of the book we’re currently reading in our book club, Bad Blood, about the ethical fiasco at the health care startup Theranos. Not just in industry, but across disciplines, we have to sell ourselves, to some extent– our careers are tied up in the success of our science. We can get into ethical gray areas in these cases. Do you think that we need to do better at addressing ethical issues during our training?”

The responses were thoughtful, but one response that I think many may hold is that: well, if you’re a sane, “good” person, you won’t do these horrible, terrible things like Elizabeth Holmes did by putting patients’ lives on the line by pretending to technology she didn’t really have. One opinion perhaps not voiced, is that as long as we have rigorous regulation, you don’t need to worry about people’s ethics; they’ll get caught by the system. The final note on which the question ended, was that the best thing we can do is to keep the patient at the forefront of our mind: what we do can save lives, or can endanger them. As long as we do that, we should be able to make sound ethical decisions.

“Bad Blood” is a novel-ized form of an investigative journalism piece at the Wall Street Journal uncovering the unethical practices of the CEO of the blood testing start-up Theranos, Elizabeth Holmes. Holmes dropped out of college to try to develop a wearable technology that could test your blood almost real-time for hundreds of analytes: instead of doctors having to send large blood samples to the lab, the patient could do all such testing in the comfort of their own home with only a drop of blood. While the technology sounds game-changing and she was able to sell the idea to investors, she always over-sold her product. It wasn’t working. So. She lied. When presenting the technology to investors and the machine errored out, they beamed over fake results from headquarters. The product got far enough along that blood testing machines were being installed in Walgreens and Safeway stores. But the blood tests weren’t done on-site, and instead were sent to labs at Theranos headquarters. The tests done on Theranos equipment were faulty, and caused several false positives and negatives that endangered patients lives. But the vast majority of tests were done on commercial equipment that wasn’t novel at all. All this was carefully hidden from regulators, and definitely not released to investors or the public. 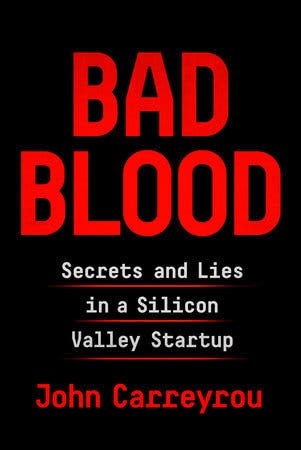 While you might be tempted to label Elizabeth a sociopath, my interpretation of the book is that these attitudes are much more far-reaching. Again, I link the prevalent attitudes of careerism and the lack of conversations surrounding ethics on campuses as two potential factors. Elizabeth wasn’t born a monster. She was very ambitious, and when tough decisions had to be made, she was willing to compromise her integrity. When decisions are entirely made as a cost analysis: what are the potential risks to my reputation, versus the glory and money to be made, you’ve really lost something. When you stop talking about ethics, and you rely on the inherent goodness in every human being, you’re going to have people willing to lie and to cheat.

In my experience as a chemical engineer, ethics felt like it wasn’t an integral part of the curriculum. It was tacked on at the end because it was an ABET requirement. Ethics doesn’t fit neatly in, because it’s not technical. But scientists and engineers need to be exposed to these things. This is the value of the humanities that is increasingly under-sold. It reminded me of a story told in a talk told at a recent LDS conference:

When I was very young, my father founded a company that specialized in factory automation. This business engineered, fabricated, and installed automated production lines worldwide.

When I entered high school, I was promoted to work on the factory floor. I started to learn how to read blueprints and run heavy steel fabrication machinery. After high school graduation, I attended university and then entered the mission field. Returning home from my mission, I went straight back to work. I needed to earn money for the next year’s school expenses.

One day soon after my mission, I was working in the factory when my father called me into his office and asked if I would like to go with him on a business trip to Los Angeles. This was the first time my father invited me to accompany him on a business trip. He was actually letting me go out in public to help represent the company.

Before we left on the trip, he prepared me with a few details about this potential new client. First, the client was a multinational corporation. Second, they were upgrading their production lines worldwide with the latest in automation technology. Third, our company had never previously supplied them with engineering services or technology. And finally, their top corporate officer in charge of purchasing had called this meeting to review our bid on a new project. This meeting represented a new and potentially important opportunity for our company.

After arriving in Los Angeles, my father and I went to the executive’s hotel for the meeting. The first order of business was to discuss and analyze the engineering design specifications of the project. The next discussion item concerned operational details, including logistics and delivery dates. The concluding agenda item focused on pricing, terms, and conditions. This is where things got interesting. This corporate officer explained to us that our price proposal was the lowest of those who had submitted bids on the project. He then, curiously, told us the price of the second-lowest bid. He then asked us if we would be willing to take our proposal back and resubmit it. He stated that our new price should come in just below the next highest bid. He then explained that we would split the newly added dollars 50–50 with him. He rationalized this by saying that everyone would win. Our company would win because we would be making considerably more money than our original bid provided. His company would win because they would still be doing business with the lowest bidder. And, of course, he would win by taking his cut because he put this great deal together.

He then gave us a post office box number where we could send the money he requested. After all of this, he looked at my father and asked, “So, do we have a deal?” Much to my surprise, my father stood up, shook his hand, and told him we would get back to him. After leaving the meeting, we got into the rental car, and my father turned to me and asked, “Well, what do you think we should do?” I responded by saying I didn’t think we should accept this offer.

My father then asked, “Don’t you think we have a responsibility to all of our employees to maintain a good backlog of work?” While I was contemplating his question and before I could answer, he answered his own question. He said, “Listen, Rick, once you take a bribe or compromise your integrity, it is very difficult to ever get it back. Don’t ever do it, not even once.”

Wouldn’t the business world be so much better if we could all live by such principles?

But it isn’t like that. Bad Blood revealed a world where ethics is replaced with lawsuits. Instead of discussing the ethics of a situation, you have “communications specialists” that help spin your situation into the most positive light:

“Holmes and her communications consultants discussed strategies for how to hit me back against my reporting. One approach she favored was to portray me as a misogynist. To generate further sympathy, she suggested she reveal publicly that she had been sexually assaulted as a student at Stanford.”

Lawyers intimidate those who try to speak up when then know unethical behavior is occurring that they don’t want to be party to. This book gets scary; private investigators following you around, threats to sue, and other intimidation tactics.

Elizabeth came to the point where she was living in an alternate reality. At a work Christmas party, this was her message to employees:

“The minilab is the most important thing humanity has ever built. If you don’t believe this is the case, you should leave now,” she declared, scanning her audience with a dead serious look on her face. “Everyone needs to work as hard as humanly possible to deliver it.”

Trey tapped Greg’s foot. They glanced at each other knowingly. What Elizabeth had just said confirmed their armchair psychoanalysis of their boss: she saw herself as a world historical figure. A modern-day Marie Curie.

Of course, we can’t totally eradicate unethical behavior. But I feel that we can do better at posing these difficult questions to students before they will be faced with ethical dilemmas that carry a lot of weight. As an academic, there is always pressure to over-sell. When applying for grants, your research is measured by its novelty, its “broader impacts.” You essentially need to over-sell. We teach students how to put themselves in the best light on their resumes, we teach soft skills and how important they are, how to network. But we rarely have real conversations about ethics. What can we do to include ethics in STEM curriculum?