I forget exactly where this book popped up initially– but I assume it was a Goodreads recommendation based on some of the politically oriented books or German history books I’ve been into as of late. Here’s the Goodreads blurb: 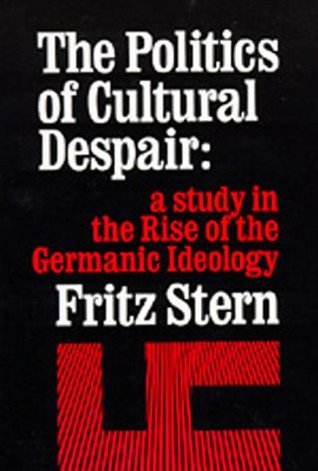 This is a study in the pathology of cultural criticism. By analyzing the thought and influence of three leading critics of modern Germany, this study will demonstrate the dangers and dilemmas of a particular type of cultural despair. Lagarde, Langbein, and Moeller van den Bruck-their active lives spanning the years from the middle of the past century to the threshold of Hitler’s Third Reich-attacked, often incisively and justly, the deficiencies of German culture and the German spirit. But they were more than the critics of Germany’s cultural crisis; they were its symptoms and victims as well. Unable to endure the ills which they diagnosed and which they had experienced in their own lives, they sought to become prophets who would point the way to a national rebirth. Hence, they propounded all manner of reforms, ruthless and idealistic, nationalistic and utopian. It was this leap from despair to utopia across all existing reality that gave their thought its fantastic quality.

I am always interested into more insights into the rise of National Socialism in Germany. The average American doesn’t really have any real true understanding of the complexities involved, other than German was “the bad guy” in both World War I and World War II, and that Germans as a people just really hated Jews. That’s about all you get. Some may include more nuance: The Versailles Treaty that the Allies imposed on Germany after World War I was brutal and embarrassing to Germany, might come up.

What this book contributes is the idea of the mood of nostalgia for a mythic past and the cultural despair in the face of modernity (secularization, urbanization, and industrialization) in Germany in century leading up to World War II, while not necessarily the only cause, certainly created the conditions for a Hitler to rise to power:

These three critics witnessed the gradual destruction of the old Germany and the emergence of a new, urban, secular country. They hated the temper and the institutions of this new Germany and decried the conditions of modernity. Their protests, as we have seen, were not unique. Others were dismayed as well: conservatives saw their beliefs and privileges challenged, Christians saw their faith attacked, and a new class, the urban proletariat, attacked the exploitative and inegalitarian character of modern industrial society. These groups and their spokesmen had a stake in the past or a tangible goal for the future…

Our critics were simultaneously proud and resentful of their alienation. They were proud of the perspicacity which their “untimeliness” had granted them, but their deepest longing was for a new Germanic community in which they and all their countrymen would at last find the peace of complete unity. Because of this longing they made the leap from cultural criticism to politics, assuming that cultural evil could be dissolved by the establishment of the right kind of faith and community.

Some of these arguments bore resemblance to another book I read recently, Why Liberalism Failed by Patrick Deneen. The stark title critiques the two articles of faith of liberalism: the market and the state. To show how these arguments could perhaps be an extension of the cultural critics of pre-war Germany, here’s a quote:

Liberalism has failed because liberalism has succeeded. As it becomes fully itself, it generates endemic pathologies more rapidly and pervasively than it is able to produce Band-aids and veils to cover them. The result is the systemic rolling blackouts in electoral politics, governance, and economics, the loss of confidence and even belief in legitimacy among the citizenry, that accumulate not as separable and discrete problems to be solved within the liberal frame but as deeply interconnected crises of legitimacy and a portent of liberalism’s end times.

The conservative reactionaries in pre-war Germany also longed for a community, expressed as das Volk, and fought against liberalism as an artifice imported from the West.

“It is true that the virtues which are less esteemed and practiced now–independence, self-reliance, and the willingness to bear risks, the readiness to back one’s own conviction against a majority, and the willingness to voluntary cooperation with one’s neighbors–are essentially those on which the of an individualist society rests. Collectivism has nothing to put in their place, and in so far as it already has destroyed then it has left a void filled by nothing but the demand for obedience and the compulsion of the individual to what is collectively decided to be good.”

Of course, both liberals and conservatives today feel a need to make clear their ideologies bear no connection or responsibility to Nazi Germany: the conservatives like to pretend that National Socialism wasn’t a conservative movement, or at least make clear that Communism was just as bad, if not worse:

While the Left like to pretend that National Socialism had nothing to do at all with socialism:

Folks who think Nazis were leftist 'cuz there's "socialist" in the name must get really confused by "buffalo wings."

This book is a good start for those looking to add a little nuance to the discussion. I would think that the warnings against cultural despair and irrationalism in politics are very relevant to our day, when most political discussions are carried out in the form of Twitter rants.

3 thoughts on “The Politics of Cultural Despair”