When you grow up in Utah, the name Bennion in ubiquitous. You probably have met a Bennion somewhere in school or at work or at church. The name Bennion to me brings to mind the Bennion Center at the Union building on the University of Utah campus. But while the name became familiar, I never knew the significance of the namesake.

As I have had the chance to read more literature in LDS literature, history, and doctrine, the name Lowell Bennion kept coming up, and it seems he was probably someone worth getting to know. The first encounter I remember was in Gregory Prince’s David O. McKay and the Rise of Modern Mormonism when he is mentioned for being slightly outside of mainstream Mormonism:

And Paul H. Dunn, of the First Council of Seventy, spoke of McKay’s attitude toward those who were outside the mainstream— not in action, but in thought. After spending a decade as a teacher in the Institutes of Religion, Dunn was called by McKay to be a General Authority at the unusually young age of thirty-nine:

Here I am a young buck coming into the system, and the circulation is, “Let’s excommunicate the Sterling McMurrins of the Church, and weed out the liberals.” That got thrown around a lot. Even poor Lowell Bennion got thrown into some of that. If it hadn’t been for President McKay, we’d have had a fiasco on Lowell Bennion. There’s one of the sweetest, great Christians of the world. I would be totally surprised if all of heaven isn’t a Lowell Bennion philosophy. There isn’t a kinder, more gentle Christian in the world. And yet there were those in the system who tried to weed him out, because he kept the President McKay kind of vision open….

The George Boyds and the Lowell Bennions kept people in the Church whom nobody else could have. Philosophically, they could go with you on the trip through your frustration in thinking, and bring you back. Not many people could do that. I worked with George for many years down at the University of Southern California. I watched him save kids that nobody else could. And yet there was that element in the Church that tried to get him bumped, because he didn’t teach what they taught. I’ve found in the Church, and this is what gave me great comfort with President McKay, that there is room for all of them, not just a few, not just those here or there, but the whole spectrum. President McKay would say, and two or three times I heard him say privately, and once or twice publicly in meetings where I sat, that “if you would have to take action on that kind of a person thinking that way, you’d better take action on me, too.”

Even without knowing very much about Lowell Bennion, I knew I wanted to find out more. I appreciate the people within Mormonism who don’t get noticed necessarily by the system for the good they do. They may not be apostles or seventies or stake presidents or bishops. But they think deeply, they are committed to their faith, and they bless the lives of others. Perhaps what President Uchtdorf referred to as “helpers” in the Church. 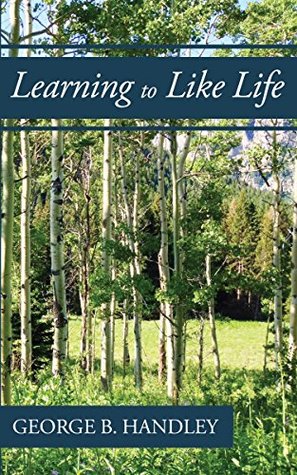 When Good reads recommended Learning to Like Life: A Tribute to Lowell Bennion I immediately added it. The author, George B. Handley, was a new one to me. He is a professor at the BYU known for his writings on environmentalism. Lowell Bennion had an immense influence on his life for whom he worked on a boy’s ranch in his youth. The genre, a tribute is unique, because it isn’t a biography or a memoir of Lowell’s life. In fact, much of the book doesn’t deal directly with Bennion at all, but rather the philosophy that Handley understood Bennion’s life to represent. It’s a book on life lessons. And they are profound. The chapters are as follows:

Bennion lived a simple life, and one that defies many of the expectations and assumptions both within Mormonism and the monoculture of America. I could see why he may have upset some hoity toities in the Church bureaucracy; they may have supposed he didn’t have his priorities straight. Take this exchange that Handley found initially unsettling as a youth:

I know Doc used to say that as he grew closer to death, he was less interested in heaven and salvation and more interested in simply continuing the work he had already begun. I might have winced hearing him say this, because at that point in my life heaven was just beginning to become a real desire of my heart. I wanted to hear him say that yes, indeed, heaven was worth pursuing because of how different and how much better it would be than here. But I now see that Doc didn’t mean anything heretical by this. Quite the opposite, because he understood that heaven’s use to us is to get our heads up from the trough of life long enough to see that earth work is what we should most desire.

The most important things are the ordinary ones. And Mormonism, at its roots, is this. But we sometimes like to over-complicate things, I think.

Another passage that struck me was a memory of Handley himself:

I remember a small crisis of faith on my mission instigated by an encounter with difference that was previously inconceivable to me. It happened the very first week. I was converted to the gospel. I was eager to teach, but I was terrified by the strange feeling of the streets of Venezuela, by the language I couldn’t yet penetrate, and by the sights and smells and shape of the place. On our first day, we were let into an elderly and poor woman’s home. She was not particularly excited by our presence, that much I could tell, but my companion was eager to show me how a discussion worked. As my companion projected a slide of the First Vision on the wall in her home, a small lizard walked across the image of the Joseph Smith kneeling in the sacred grove. Suddenly I thought to myself: “What am I doing here? Why am I so far from home? Can the story of the gospel really extend this far in its relevance? This woman doesn’t even care about this.” I was becoming aware of my cultural bias, my narrow world that I had been raised in, but instead of doubting the adequacy of my worldview, I instead doubted God. I wrestled with this feeling for several days, eventually coming to understand how irrational my doubt was. Did I really think that God was unaware of the world I had entered? That he didn’t know and love each person I met as much as he did me? Why was I so willing to shrink His vision when it was mine that needed to expand? God is our father and his love extends to all. So he apparently loves an enormous number of people who know absolutely nothing about the restored gospel, let alone about my middle class American life. Most of them don’t speak English. The vast majority of them are not white. It’s a safe bet that 50 percent are women. Many are very old. Many are so young they don’t yet know how to speak. Over a billion of them don’t have access to clean drinking water and live in extreme poverty. And most have suffered far more than I will ever know. I needed to get over myself.

Like Handley, it took me twenty years to even fathom a world outside of my immediate and very Mormon world. People are OK without being Mormon. Mormon than OK, they are good, glorious beings just as they are and they are making the world a better place. I remember a few experiences on my mission similar to Handley’s where this initially uncomfortable sentiment started to get through. I remember teaching one man who insisted the sacrament wasn’t meant to be institutionalized, but it’s value came in its simplicity. It should be a shared meal of bread and wine among friends, to live Christ’s word that “where two or three are gathered in my name, there will I be also.” I remember wanting to agree with him, but my Preach My Gospel answer had to dismiss it as out of hand, and I gave the well-known analogy of a policeman: “if you got pulled over by a random person, would you accept the ticket? No, because only policeman have the authority to do so.” If that man is sharing the sacrament among friends, I feel that he may be getting more out of his sacrament than we as Mormons sometimes do on Sundays. And I’m glad he’s drawing closer to Christ.

A great read, and I’m glad Handley is reviving the legacy of Lowell Bennion. I hope I can find a good biography of him soon too.

2 thoughts on “Morning inspiration: “Learning to Like Life: A Tribute to Lowell Bennion””