We got our Husky pride on this month for our lab book club and tackled the inspiring story of the 1936 University of Washington Olympic rowing team in Berlin. I had heard of   previously– I doubt you can attend UW and not hear about it (the UW library alone has 6 copies of it. Pierce County Library has 11). A fellow graduate student from a neighboring lab recommended we try it for the book club, and we all agreed to give it a shot. 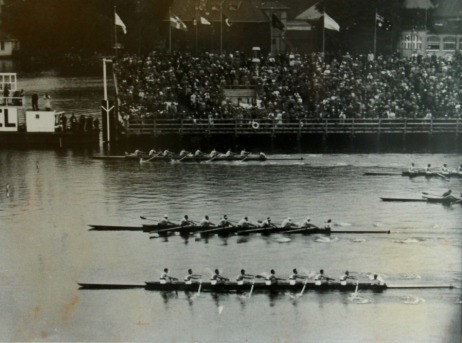 I will admit up-front that the book is a little hard to get into at first, but I quickly fell in love with the setting, the story, and the characters. The author assembled the story from the diaries of the rowers and a personal interview with one of the last survivors of the crew, Joe Rantz. Of all the crew members, you get to know Joe the best. The majority of the book (~75%) takes place in 1930s Seattle (and surrounding area). And it was a very different world. I am used to the crowded streets, the ridiculous housing prices, and the general idea that Seattle is a place on the map. It wasn’t so back then. Seattle was a backwater town with not a lot to its name. A central theme throughout the book is the juxtaposition of the rough-around-the-edges sons of loggers UW rowing team and the rich preppy kids from the East. I found the setting utterly idyllic. Back in the day, people would just buy a plot of land and build themselves a house– probably move in to the first floor when that was done and keep on building. You could start a garden on the banks of Lake Washington, harvest leftovers from logging companies, or fish in the stream without licenses or government interference (well technically not. Each of these happen in the book, and a few end up getting caught haha). It was utterly refreshing from the busy and sprawling city that is here now.

The three characters you get to know best are Joe Rantz, one of the crewmates that struggled at first and had a difficult upbringing (a step-mother who kicked him out of the house and a dad who didn’t do anything to stop her); Al Ulbrickson, the quiet and brooding UW rowing coach insistent on going for the gold in the Olympics; and George Yeoman Pocock, the talented Brit in charge of making the shells (boats) for the rowing team, and a generally inspiring character. I liked the microcosm that the author explores. These are names you aren’t likely to hear in any history textbook. But it makes their story absolutely fascinating. How they grew up, how they worked and scraped together a living even in difficult times, and how they came to be a team.

The book has a parallel story throughout following the Nazi preparations for the Olympics. You learn how the Nazis were intent on using the Olympics as a facade to hide their ulterior motives, and convince their neighbors in the West that they were an upright and civilized people. The level of deception is amazing. One not-so-well-known character from history you meet is Leni Liefenstahl, the ambitious German filmmaker charged by Hitler to film the Olympics and make it the best in propaganda that there has ever been. You can find the video of the Olympics HERE on Youtube.  Fascinating story, and a good accompaniment to the other book I read about pre-WWII Germany Before the Deluge.

The most important theme in the book is the level of unity that was required for the team to be successful. These aren’t just inspirational poster material; it made all the difference whether they got the gold or not. I have a hard time fathoming the level of trust and discipline needed to be on a rowing team of that caliber. Some descriptions begin to sound transcendent:

Don Hume on the port side and Joe Rantz on the starboard were setting the pace with long, slow, sweet, fluid strokes, and the boys on each side were falling in behind them flawlessly. From the banks of Lake Carnegie, the boys, their oars, and the Husky Clipper looked like a single thing, gracefully and powerfully coiling and uncoiling itself, propelling itself forward over the surface of the water. Eight bare backs swung forward and backward in perfect unison. Eight white blades dipped in and out of the mirrorlike water at precisely the same instant. Each time the blades entered the lake, they disappeared almost without a splash or ripple. Each time the blades rose from it, the boat ghosted forward without check or hesitation.

It makes you feel that you are missing out on something essential if you have never experienced the absolute unity and grace of a rowing team.

Each competition, each race, keeps you on the edge of your seat. First, you read about the battle between California and Washington as they compete for the national race back east in Poughkeepsie. Then you read the disappointments and successes there as they fight for dominance. And the final race between the best in the world– Germans, Italians, and Brits. I’m not much of a sports enthusiast, but when you have a narrator like this, it is hard not to be fascinated.

A stunning read. Proud to be a Husky!