Next, I chose to turn to a later story in the Bible, the story of Daniel in Babylon. Daniel and his fellows, Shadrach, Meshach, and Abed-nego, were taken into the king’s court during the Babylonian captivity. the Israelite nation was invaded, a puppet king installed, and its people forced to move from their homeland in an attempt to wipe out their cultural memory. President Uchtdorf recently recounted the story of Daniel with a timely message:

Daniel had been raised as a follower of Jehovah. He believed in and worshipped the God of Abraham, Isaac, and Jacob. He had studied the words of the prophets, and he knew of God’s interaction with man.

But now, at a very young age, he was a prisoner-student in Babylon. The pressure on him must have been immense to abandon his old beliefs and adopt those of Babylon. But he stayed true to his faith—in word and in deed.

Many of you know how it feels to defend an unpopular truth. In the Internet slang of today, we talk about getting “flamed” by those who disagree with us. But Daniel wasn’t just risking public ridicule. In Babylon, those who challenged the religious authorities understood what it means—figuratively and literally—to be “flamed.” Just ask Daniel’s friends Shadrach, Meshach, and Abed-nego.

In the first 4 chapters of Daniel, we encounter King Nebudchanezzar who seems to represent the world and all its power. Not just power, but seemingly arbitrarily wielded power:

When reading of King Nebudchanezzar’s methods, I was reminded of Christ’s words regarding the ways of the Gentiles: “Ye know that the princes of the Gentiles exercise dominion over them, and they that are great exercise authority over them. But it shall not be so among you: but whosoever will be great among you, let him be your minister; And whosoever will be chief among you, let him be your servant” (Matt 20:25-26). Joseph Smith, familiar with the use of arbitrary power, also mourned such abuses: “We have learned by sad experience that it is the nature and disposition of almost all men, as soon as they get a little authority, as they suppose, they will immediately begin to exercise unrighteous dominion. Hence, many are called but few are chosen” (D&C 121:39-40). We should avoid adopting King Nebudchanezzar’s methods, and not let ourselves get caught up in the motivations that drive similarly built power structures.

As President Uchtdorf so beautifully explained, Daniel didn’t cave in to the ways of Babylon– despite having every reason to do so. Aren’t a comfortable life, a cushy job– not to mention not dying, justifiable reasons for doing so? The idea that the end doesn’t always justify the means can be unsettling. The gospel isn’t consequentialist; the way you get there does matter. The gospel also doesn’t prize security above all else. Sometimes you will have to oppose the waves of public opinion. Sometimes you may have to give up a job, or the likelihood of a higher pay check. In this modern-day Babylon, there are competing priorities.

Let’s look at the examples in the Book of Daniel where these priorities openly oppose each other. We’ll look at the things Daniel and his fellows were asked to do, the consequences for refusing, and what those chose to do instead.

Refusing to eat the king’s meat. One of the first things that Daniel and his fellows were asked to do was to conform to the Babylonian lifestyle: they were to partake of the king’s meat and drink. I am assuming that this conflicted with some of the dietary restrictions in the law of Moses. When Daniel refuses to eat, the King’s officer in charge says “I fear my lord the king, who hath appointed your meat and your drink: for why should he see your faces worse liking than the children which are of your sort? then shall ye make me endanger my head to the king.” By refusing to eat, Daniel is not only risking his own neck, but the guy in charge as well. Daniel expresses confidence in the Lord’s commands, by predicting that, if given a simple diet of water and grains, the Israelite young men will be “fairer and fatter in flesh” than those who ate the king’s meat. After the ten days, King Nebudchanezzar summons them, and finds them to be ten times the worth of all the other scholars in his kingdom.

Interpreting the king’s dream of the stone cut without hands. When King Nebudchanezzar suffers from a recurring dream, he summons his astrologers and magicians to interpret his dream. But to prove they aren’t cheats, he asks them to not only interpret his dream, but to know it without him telling it to them. When none can comply, he condemns all of them to death– including Daniel and his fellows. Daniel asks to see the king, where he offers to interpret the dream. When he correctly recounts the dream and offers an interpretation, the king is astonished, saying “Of a truth it is, that your God is a God of gods, and a Lord of kings” and he makes Daniel a ruler in Babylon.

Refusing to worship the king’s idol at the threat of being thrown in a fiery furnace. Daniel’s three friends also have a conflict with the king. The king has built an idol, and insists that everyone in the kingdom bow down and worship it. They refuse. Some Babylonian tattle-tales inform the king, who becomes angry. When they refuse at his own insistence, he becomes even angrier, and has them thrown into a fiery furnace. The three are preserved, and an angel ministers to them while in the flames. The king is again astonished. He decrees that no one will say anything against Israel’s God, and makes them rulers in Babylon. 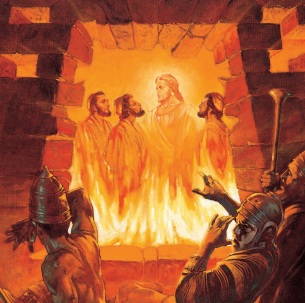 Daniel is an example of quietly and righteously standing up for what he believes. This is a different view of defiance than that which is honored in our day, which is done with accusations and condemnations of whoever you disagree with. Daniel only brings himself into the spotlight when either (a) his life is in danger (2:24-27) or (b) society seeks to force him to act a certain way (3:12-18).

Daniel also surprisingly doesn’t have anything negative to say about the king. He doesn’t condemn him. In fact, he openly acknowledges the king’s right to do as he will (2:37-38). Both of these aspects, of quiet dignity and respect for others, are both part of his example of righteous defiance.