One thing I have learned recently that has helped me in my scripture study is the realization that the Bible (as well as the Book of Mormon) isn’t a single book to be read from cover to cover, but rather a library of individual books. There are multiple genres of literature, and each book must be understood in its own context and read in its own light. We Mormons sometimes forget this, or don’t even realize it. We will create scripture chains, pulling verses from the Old Testament, New Testament, the Book of Mormon, and the Bible to make a point without realizing that we may be taking them out of context. We also tend to skip over parts we find that we don’t immediately understand, or aren’t completely explicit in their message (take the Book of Ecclesiastes for instance; on the surface, it almost sounds atheist! Why is this in the Bible?! But if you understand the frame, that the Preacher is outlining what life is like “under the sun” or with a worldly perspective, it all falls into place).

In that spirit, I am going to try reading the Bible not cover to cover, but book by book. And not necessarily in order either. I chose to start with 1 Samuel. I don’t have a specific reason, but I felt prompted to do so. So far, I have made it through chapter 13, which covers Samuel being called by the Lord, Eli’s punishment and death, Saul’s calling by God, and Saul’s first and fatal mistake of disobedience. 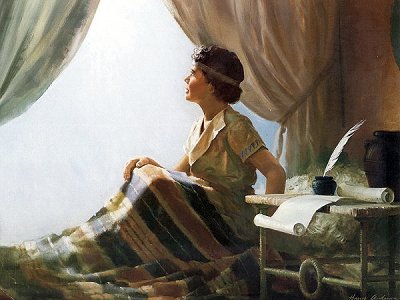 Being in a position of power, whether religious or political, isn’t a guarantee that the Lord is on your side. Even being the Lord’s anointed doesn’t make you immune.

Both Eli and Saul were rejected by the Lord, and not for any great wickedness either. Eli’s family was not taking their priestly role seriously. His sons were taking bribes. Saul didn’t offered sacrifices when he wasn’t supposed to.

But why was the Lord calling Samuel in the first place? The Lord has a servant: Eli. Eli’s story doesn’t have a happy enidng, and it would be wise to learn from his example. In the initial reading, it seems that Eli isn’t the problem: it’s his sons. His sons “abhorred the offering of the Lord” and “made the Lord’s people to transgress.” The scripture points out that they “lay with the women that assembled at the door of the congregation.” But infidelity and adultery don’t seem to be the main concern that the Lord has against them; rather, it is their utter disregard for the Lord’s sacrifices in the temple; they seek the best meat for themselves, and even take it by force if the people don’t comply with their wishes. This is what the Lord has to say to Eli:

Wherefore kick ye at my sacrifice and at mine offering, which I have commanded in my habitation; and honourest thy sons above me, to make yourselves fat with the chiefest of all the offerings of Israel my people? Wherefore the Lord God of Israel saith, I said indeed that thy house, and the house of thy father, should walk before me for ever: but now the Lord saith, Be it far from me; for them that honour me I will honour, and they that despise me shall be lightly esteemed.

Notice that the Lord identifies the self-serving attitude of his sons as their wrong, but the Lord directs his chastisement to Eli himself; by allowing his sons to continue with the sacrifices in the temple, he has honoured his sons more than he has the Lord. Does this seem unfair? Eli shouldn’t be the one who is punished, right? Just his sons.

Who is in the wrong when a bishop issues a temple recommend to a youth who isn’t spiritually prepared to go to the temple? The bishop, or the youth? Yes, the youth has the responsibility to prepare himself. If he has sinned, he must repent. And if he lies to the bishop, that is all on him. But if the bishop is aware not only of sin, but of some other form of unpreparedness, it is his responsibility to help the youth become ready before issuing the recommend. Therefore the bishop would be in the wrong in this scenario. In a spirit of not wanting to hurt anyone’s feelings or giving a kid a recommend just because he is twelve– or perhaps in an attempt to up our numbers of “members with an active temple recommend”– we can ultimately be dishonouring the Lord. This is to be taken most seriously, and it can have absolutely serious consequences.

This to me does seem strict, but it shows that on some things, the Lord can’t compromise and it will all work out in the end. Three things I learned here: (1) self-serving intentions are worse in the eyes of the Lord than even the sins of the flesh; this is the main reasons why Eli’s sons were condemned, and it was the root of the problem, while adultery was likely an outward manifestation of an inward sin. (2) The sacred cannot be profaned or used to our own good rather than the Lords. (3) We are responsible for those in our families and in our ministries. We cannot pass blame.

We must seek to make the Lord’s will our own

Saul has a similar story. He is chosen by the Lord to be Israel’s king. But not two years into his reign, and he has already compromised himself. Saul was getting ready for a battle for the Philistines. Before a battle, the Israelites would offer a sacrifice to the Lord to bless them. But Samuel was running late, and Saul was getting antsy. So he made the sacrifice himself. He took on a role that wasn’t his, and just like Eli, he dishonoured the Lord by not giving the sacred its due. Saul tries to justify his actions to Samuel:

Therefore said I, The Philistines will come down now upon me to Gilgal, and I have not made supplication unto the Lord: I forced myself therefore, and offered a burnt offering. And Samuel said to Saul, Thou hast done foolishly: thou hast not kept the commandment of the Lord thy God, which he commanded thee: for now would the Lord have established thy kingdom upon Israel for ever. But now thy kingdom shall not continue: the Lord hath sought him a man after his own heart, and the Lord hath commanded him to be captain over his people, because thou hast not kept that which the Lord commanded thee.

This is definitely a severe warning in our day too. Good intentions aren’t all that matter. Saul had the best of intentions; he wanted to fight Israel’s battles and save them from their enemies. But we can’t side-step the Lord. The ends don’t justify the means. By ignoring the Lord, Saul shows that he fears men more than God.

What does the Lord expect then? Perhaps to some, he seems rather fickle. Playing “guess what’s in my head”, not telling you the rules of the game, or changing his mind along the way. Not so. The Lord seeks someone after his own heart. It isn’t a game of adhering strictly to laws. It is seeking the Lord’s will and making it your own.

The Lord will give you what you want if you ask enough, but not for your benefit

The Lord will do what you want, if you ask him enough times. That doesn’t mean it is his will. By popular demand, the Lord gave the Israelites a king, even though kings aren’t the Lord’s way. The Lord tried to raise up a nation unlike other nations, but they ended up wanting to be just like all the other nations around them. Samuel tried to warn the people:

Then all the elders of Israel gathered themselves together, and came to Samuel unto Ramah, And said unto him, Behold, thou art old, and thy sons walk not in thy ways: now make us a king to judge us like all the nations. But the thing displeased Samuel, when they said, Give us a king to judge us. And Samuel prayed unto the Lord.

And the Lord said unto Samuel, Hearken unto the voice of the people in all that they say unto thee: for they have not rejected thee, but they have rejected me, that I should not reign over them. According to all the works which they have done since the day that I brought them up out of Egypt even unto this day, wherewith they have forsaken me, and served other gods, so do they also unto thee. Now therefore hearken unto their voice: howbeit yet protest solemnly unto them, and shew them the manner of the king that shall reign over them.

Notice the motivation in the petition of the elders of Israel: they desire to be like other nations. They know they have been set apart by the Lord, and that they aren’t supposed to accept the ways of the world. But they are tired of being different. Having a king is so reassuring!

The Lord explains to Samuel, and Samuel explains to his people, that a king isn’t the Lord’s way. By insisting on having a king, they are rejecting the Lord. This to me shows how serious we need to evaluate our own ideas and opinions in our day and age. We must understand what the Lord’s way is before we choose what we will advocate for. Change in existing institutions can be good and needed, eliminating hurtful and unrighteous aspects of our own culture. If we want to build Zion, we are absolutely going to have to change. But we should never undermine or seek to change what the Lord himself has established.

The Lord’s pattern in 1 Samuel shows that he expects a lot both from his leaders and from his people. We need to search our own hearts, and we can’t rest on our laurels, on the fact that the Lord has restored his Church, to keep us on the straight and narrow path. The Lord doesn’t take away our responsibility to seek out the truth for ourselves and to live it to the fullest.